Analysis
​
​Watchlist reports were produced from Mercantile during Discovery and the information was turned over to a expert statistician for analysis.  The expert’s findings are beyond concerning.  “The Preliminary Analysis By Expert Dr. Bernard Siskin Shows That Mercantile Treated Similarly Situated White And Black Business Borrowers Differently Between 2008 and 2011.  Dr. Bernard Siskin received a B.S. in Mathematics from the University of Pittsburgh and a Ph.D. in Statistics from the University of Pennsylvania. For many years, he taught statistics at Temple University and served as Chairman of the Department of Statistics. Dr. Siskin has specialized in the application of statistics in law, particularly in the area of analyzing data for statistical evidence of discrimination. He has testified for both plaintiffs and defendants in more than 200 cases. Dr. Siskin has frequently been appointed by federal judges as a neutral expert to aid the court in statistical issues and he was the statistical consultant to the Third Circuit Court of Appeals Task Force on Equal Treatment in the Courts. Dr. Siskin has served as a statistical consultant to the U.S. Department of Justice, the Equal Employment Opportunity Commission, the U.S. Department of Labor, the Federal Bureau of Investigation, the Central Intelligence Agency, the Environmental Protection Agency, the National Aeronautics and Space Administration and Fannie Mae (the Federal National Mortgage Association) and Freddie Mac (the Federal Home Loan Mortgage Corporation), as well as numerous other federal, state and city agencies and Fortune Five Hundred corporations.”

“This data was supplied by Mercantile pursuant to a Kent County Circuit Court order.  The data included borrower names, addresses, loan numbers, whether Mercantile placed the borrower on the Watch List, and the ultimate disposition of their loans.  Based on that data of those borrowers on the Watch List, being supplied with the names of black borrowers, and after identifying other minority borrowers by name recognition developed by the U.S. Census Bureau special tabulation of surnames, Dr. Siskin analyzed the correlation between the race of the borrower and whether the loan relationship was rehabilitated or whether the relationship was not rehabilitated and the borrower suffered an adverse lending action, such as debt acceleration, foreclosure, collection and/or litigation.  Three borrower accounts were excluded because the outcome could not be determined.  He reached the following conclusions:” 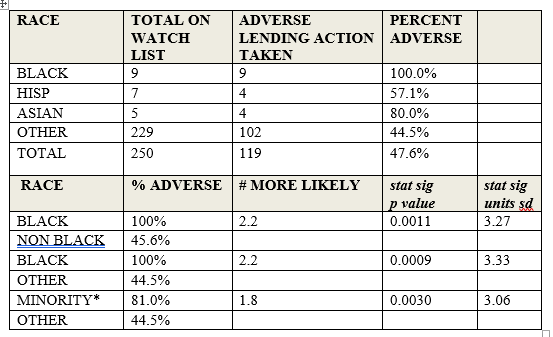 “Based on the chart above, 100% of the black business borrowers on the Watch List between 2008 and 2011 suffered an adverse lending action, as compared to 44.5% of borrowers that are not black, Hispanic or Asian.  Disparities greater than 2 units of standard deviation allow the conclusion that the disparity is not attributed to chance, but rather by factors associated with race. As the chart above shows, there exist in this case 3.27 units of standard deviation.”

“Further, Professor H. Whitt Kilburn, PH. D., a Professor in Forensic Social and Economic Data Science, explores Mercantile’s business lending to low-income and predominantly black census tracts in 2009.  The Analysis focuses on publicly available commercial loan data for Kent County census tracts 15, 26, 28, 31, and 36.  These are the tracts that the U.S. Census Bureau and the Federal Financial Institutions Examination Council (FFIEC) report as “low income” for purposes of CRA reporting.  Of these five low-income census tracts, three are predominantly black, while two are not.”

“Kent County census tract 15, in which Mercantile’s headquarters lies, is 6.7% black.  Tract 26 is 19.5% black.  Tract 28 is 58% black. Tract 31 is 79% black.  And Tract 36 is 75% black.  By comparing Mercantile’s business and commercial lending among these census tracts, the Court has a reasonable snap-shot of Mercantile’s minority, and specifically black, business lending in Kent County, Michigan.   Although Professor Kilburn requires additional data to reach final conclusions, he states that “loan activity (measured by the count of loans per census tract) within tracts 28, 31, and 36 [the predominantly black tracts] was substantially lower than the amounts in census tract 15 and 26” and that “at the census tract level the data suggest that it may be the case that racial minority percentage is associated with loan activity.”  When comparing Mercantile’s loan activity in the predominantly black tracts to the other low-income tracts, Prof. Kilburn observed that “[C]ensus tracts 28, 21, and 36, all geographically proximate to each other (east of Route 131) in Grand Rapids, received substantially lesser numbers of loans compared to Tract 15 [the pre-dominantly white tract in which Mercantile is headquartered],” and within tract 28, “loan count dropped by a factor of one-third” from 2009 to 2010.  Dr. Kilburn further observed that “[f]rom 2010 to 2013, tracts 28 and 31 received four or fewer loans, which proportional to tract 15 was about 30 percent of total loans.”  He also observed that in tract 31, there was at least one loan every year until 2008 and 2009 when the loan amount fell to zero.  And, the “box-plots” of commercial lending within the three pre-dominantly black census tracts speak for themselves—showing an increase in lending through the mid-2000s and abandonment of these tracts in 2009 and 2010.”  Both experts have findings that support the claims of the 10 black business owners, yet their cases have been dismissed despite all of the evidence uncovered thus far.    ​
​Third Amended complaint in the United States District Court, Western District of Michigan, Southern Division.